KNOW BEFORE YOU GO

When you experience a Disney Cruise Line Vacation, you embark on a voyage filled with fantasy, fun and excitement. No matter what your age or vacation style, you'll create long lasting memories aboard the magnificent Disney Cruise ships. Let us help you plan your perfect cruise!

Get up to a $1000 Shipboard Credit and an Exclusive Gift*!
Just make your Disney Cruise Line reservation with Dreams Unlimited Travel and receive shipboard credits up to $1000* to spend on your Disney Cruise!
Click Here for Details 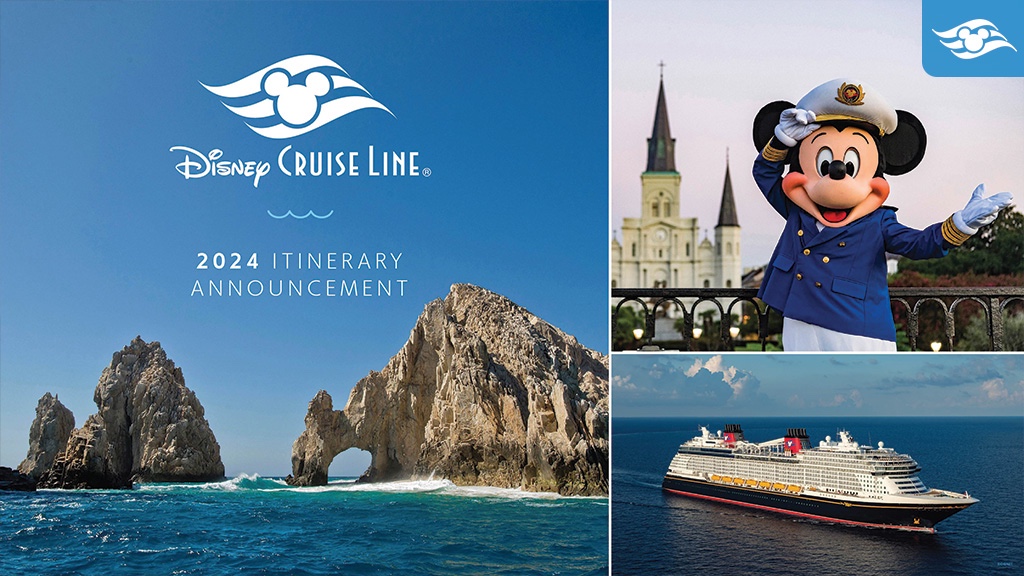 Guests will be able to sail out of the two ports in the Sunshine State as well as adventures coming out of Louisiana, Texas, and California. Disney Cruise Line fans will be able to escape the cold winter months with a magical vacation at sea in 2024.

Bookings open to the public on Dec. 15, 2022. Guests who are Disney Cruise Line Castaway Club and select other affinity groups may take advantage of the following extended early booking windows:

The Disney Dream will begin early 2024 with an assortment of three- and four-night getaways to the Bahamas and five-night vacations to the western Caribbean, all of which will feature classic Disney Cruise Line experiences such as Broadway-style shows, innovative dining, character encounters, and fireworks at sea.

All sailings from Florida will include a stop at Castaway Cay, a picturesque private island oasis reserved exclusively for Disney Cruise Line guests. Located in the turquoise waters of the Bahamas, Castaway Cay provides the ultimate escape with something for everyone in the family, including adventure, relaxation and quality time.

Also from Port Canaveral, the Disney Fantasy will continue seven-night sailings to the white-sand beaches of the eastern and western Caribbean. Eastern Caribbean cruises will visit Tortola and St. Thomas, while western Caribbean itineraries will feature the ports of Cozumel, Mexico; Grand Cayman; and Falmouth, Jamaica. Every Disney Fantasy sailing also includes a stop at Castaway Cay, along with several days at sea, giving the family more time to enjoy all the fun and relaxation offered on board.

Caribbean Adventures from Texas and Louisiana

The Disney Magic will have two limited-time engagements in Galveston in early 2024. After ringing in the New Year from the Lonestar State, the ship will embark on Caribbean adventures ranging in length from four to six nights through the end of January. Upon returning for another month-long stint between March and April, the ship will sail cruises ranging from four to seven nights to the western Caribbean during the popular spring break period.

New Orleans will welcome the Disney Magic back for a second consecutive year in February 2024 with four-, five- and seven-night cruises to the Caribbean. The Big Easy is the perfect city to extend a vacation either before or after a cruise to enjoy jazz and jambalaya in the city that inspired Walt Disney Animation Studios’ “The Princess and the Frog.”

After returning from its inaugural season in Australia and New Zealand, the Disney Wonder will arrive in San Diego, California, in March 2024 for three- to seven-night voyages to Mexico, including the Baja peninsula. Known for its vibrant culture, stunning beaches, and saltwater adventures, families can visit some of Mexico’s most prized destinations, including Cabo San Lucas, Puerto Vallarta, Mazatlan, and Ensenada, along with stops to the inviting shores of Catalina Island off the California coast.

New Adventures Aboard the Disney Dream

The Disney Dream has new destinations on the horizon for the fall of 2023.

Following its inaugural season in Europe, the Disney Dream will set sail from New York City for the first time. Families will enjoy four-, five- and six-night sailings from the Big Apple to Bermuda, where they will explore the island’s renowned pink-sand beaches, world-class shopping, aquatic adventures and distinctive blend of British and Caribbean culture. Plus, a special four-night voyage on the Disney Dream will transport guests to the charming Canadian seaport city of Saint John.

Starting Nov. 20, 2023, Disney Cruise Line will find a new South Florida home at Port Everglades in Ft. Lauderdale, offering four- and five-night cruises aboard the Disney Dream to tropical locales in the western Caribbean and Bahamas. Families will enjoy stops in places like Grand Cayman, Cozumel or Nassau from this first-time home port, along with visits to Castaway Cay, Disney’s private island oasis.

In the fall of 2023, the Disney Wish and Disney Fantasy will continue sailing from Port Canaveral to tropical destinations in the Bahamas and Caribbean.

The Disney Wish will sail three- and four-night cruises to the Bahamas, including visits to Nassau and Castaway Cay.

The Disney Fantasy will offer families even more time to experience Disney Cruise Line’s world-class dining, Broadway-style shows and spaces designed for the entire family during seven-night cruises to stunning destinations in the eastern and western Caribbean.

For more details, including itinerary and booking information, click here. 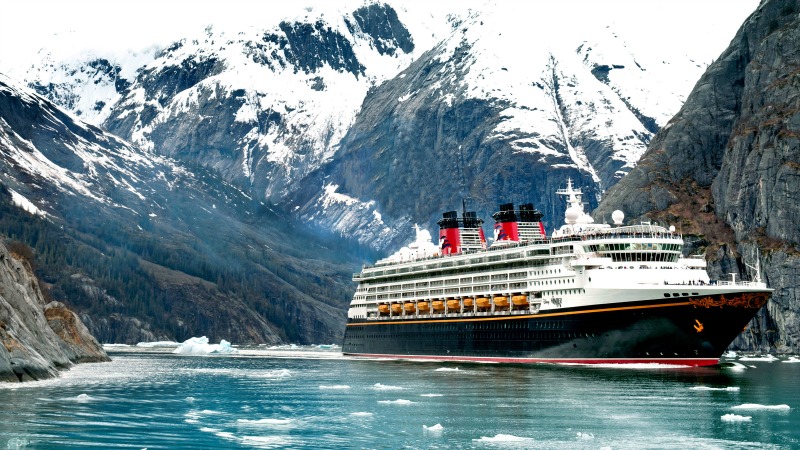 Disney’s ships are going to move around a bit next year as we expected. The Disney Dream is heading over to Europe while the Disney Wonder will spend the summer in Alaska. The Disney Fantasy and Disney Wish will both stay at Port Canaveral with cruises to the Caribbean and Bahamas. The Disney Magic will sail out of Miami and San Juan. Read below to learn more about the destinations and view the itineraries and sail dates by clicking this link.

With sailings anywhere from four to 11 nights, the Disney Dream will sail from Barcelona and Rome to picturesque ports of call throughout the Mediterranean, including a first-ever seven-night sailing to the Greek Isles with stops in the ever-popular ports of Santorini and Mykonos.

Late summer/early fall departures of the Disney Dream from Southampton will feature cruises to a wealth of destinations including Spain, France, the British Isles, Norway, and Iceland. New ports of call include the postcard-worthy La Rochelle, France, and two new ports in Norway – Skjolden, home to a wealth of natural attractions, and Sandnes, a small city just outside the metropolis of Stavanger known for its outdoor activities.

The breathtaking natural beauty of Alaska will combine with the magic of Disney on five-, seven- and nine-night sailings on the Disney Wonder from Vancouver, Canada. Beginning in May, cruisers will be invited to discover exciting ports like Ketchikan and Skagway, with their prehistoric glaciers, gold mining relics, and spectacular land- and sea life. Three Alaskan itineraries call at Icy Strait Point, home to a coastal rainforest, wilderness tours, and – for thrill-seekers – ziplining above the treetops.

Tropical Escapes to the Bahamas and Caribbean from Florida

Sun-splashed tropical isles throughout the Bahamas and Caribbean will await guests on three Disney Cruise Line ships from Florida in summer 2023.

For its first full summer of sailing, the Disney Wish will homeport in Port Canaveral near Orlando for a series of three- and four-night Bahamas cruises to Nassau and Disney’s private island oasis, Castaway Cay. The Disney Wish will feature exciting new additions including Disney’s first Frozen-themed theatrical dining experience and AquaMouse, a wild water adventure and first-ever Disney attraction at sea.

Port Canaveral will also be the departure point for the Disney Fantasy for sailings ranging in length from five to ten nights. In addition to seven-night cruises to popular ports in the eastern and western Caribbean, Guests will also be able to experience a five-night Bahamian sailing with back-to-back calls at Castaway Cay, a 10-night southern Caribbean itinerary to the islands of Aruba and Bonaire and an eight-night cruise featuring two days on the beautiful pink sand beaches of Bermuda. 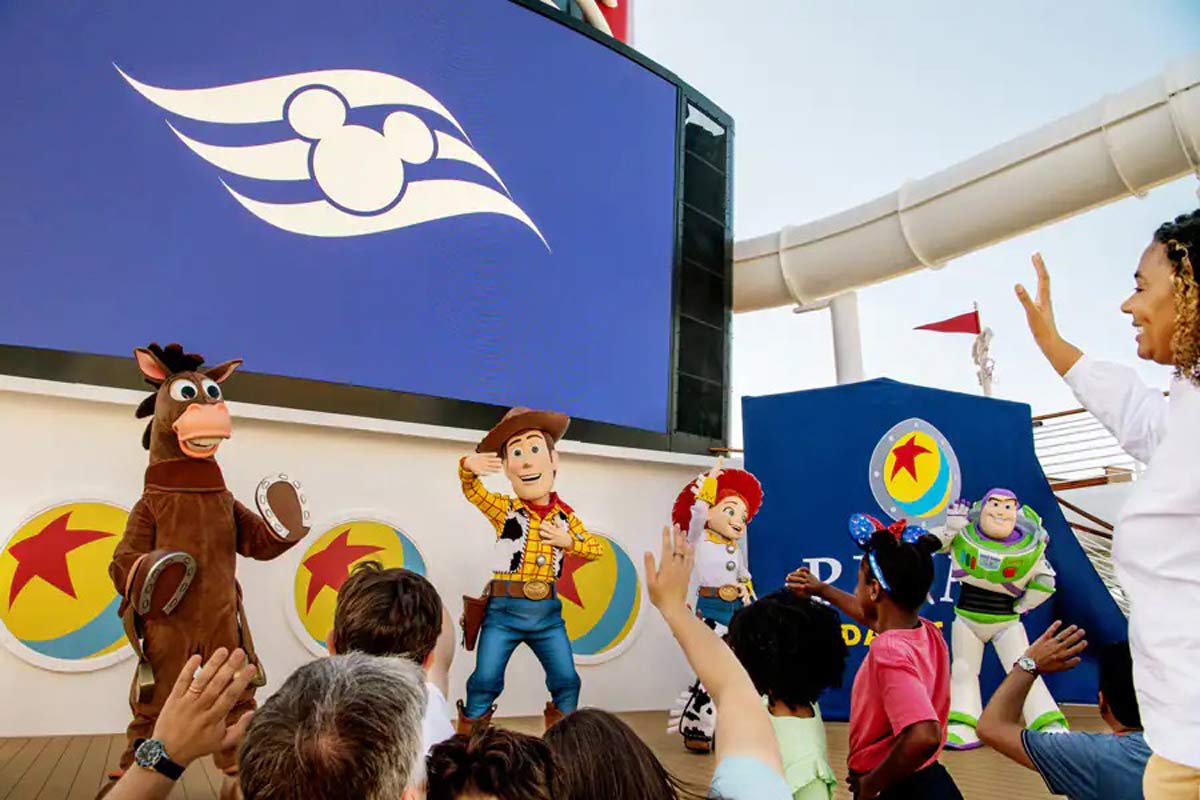 Disney Cruise Line offers special days during select cruises where a specific theme is celebrated. These special itineraries include favorite characters, entertainment, food, and so much more. Take a look at the links below for the current offerings!

The fall holidays are about to get even more magical – with everything from special parties to enchanting stage shows. Set sail for these two limited-time celebrations. One is not-so-scary and the other is very merry.

Halloween on the High Seas Cruises

Holiday activities and offerings are subject to change and may vary by ship and itinerary. Please note that the life-sized gingerbread house is usually constructed in November and will not be available on early November sailings. It should be completed and ready for viewing during the last week of November. Click Here for More Information

Already have a Disney Cruise Line reservation booked?
If you booked your DCL reservation within the last 30 days, Email us to see if we can save you money, apply a Shipboard Credit, or receive our Exclusive Gift!
*Deposit paid. Not paid in full. Other Restrictions Apply